The last few weeks, Aim Right’s programs have been on “Christmas break” so staff can enjoy time with family.  During this winter siesta, I read this new release from the local library and would recommend it: 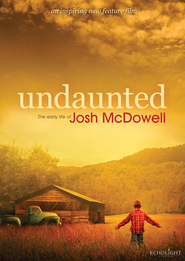 It’s called Undaunted:  The Early Life of Josh McDowell﻿, and it’s written by Cristobal Krusen and McDowell himself.  You might already know of Josh McDowell as an apologist, author, and youth evangelist, but you may not know much about the abusive childhood he experienced.  It’s not far-fetched to say that he was an at-risk youth.
A DVD has also been released by the same title.  You can watch the movie trailer, purchase the book or DVD, and find a downloadable study guide here on Josh McDowell’s website.  I haven’t personally seen the movie, but it was awarded Best Evangelical Film of 2012.  While the film is not rated, it is Dove-family approved as suitable for ages 12 and up.
Posted in Uncategorized